A woman who will never become queen and whose husband is the furthest from the throne, Meghan Markle has stolen many hearts and become more influential than Kate Middleton. Is it because her story is like a fairy tale? Is it because she stands for change? Or maybe she just understands how to create influence and give people what they expect? And is the fact that she was able to build such a strong position in such a short space of time a sign that people might want more from her?

Here at indaHash we are watching social media trends closely and a royal wedding is definitely something that causes a stir. Findings from our report last year show that women are the ones who lead in the new media field but the ‘newest’ female members of the Royal Family are exceptional examples as they don’t even own social media accounts of their own and yet have a huge impact on them globally.

As indaHash have unique access to a large base of global influencers, we decided to ask them about the new Duchess of Sussex (Meghan Markle). We also wanted to compare her with another admired, beloved and strong woman – the Duchess of Cambridge Kate Middleton. So what did we learn? Keep on reading!

Who wins the popularity contest?

As Meghan Markle is the first American to join the Royal Family, we wanted to see if she was as influential in the UK and rest of the world as she is in the US. We were surprised by the fact that influencers from both the UK and US recognised her as more influential than Kate Middleton – 55% and 68% respectively. The future Queen of Great Britain is however seen as a more influential person by the influencers from rest of the world (apart from UK and US). 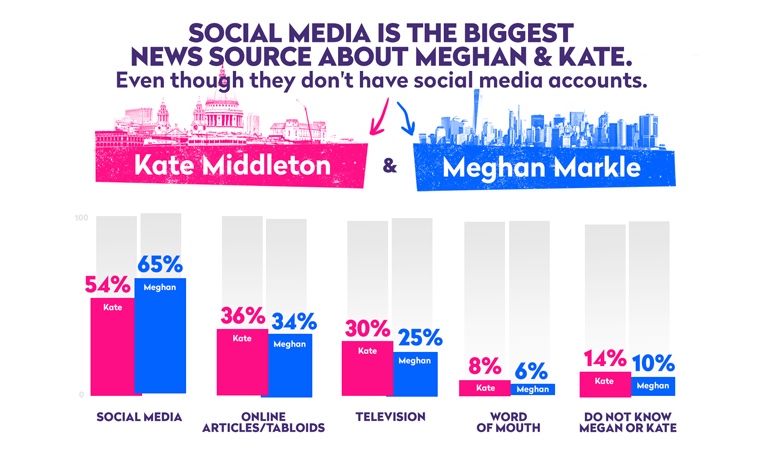 Social media is the biggest news source about the Royal Family.

We asked influencers would they be interested in seeing Instagram posts from the Duchesses and it was a resounding YES! 74% of those surveyed would click ‘Follow’ on the personal account of the Duchess of Sussex and 64% of influencers around the world would prefer to follow Meghan rather than Kate Middleton with the most enthusiastic being those in their mid-20s.

Maybe it’s time for Royal Family to change their views on social media and allow some members to use the medium?

What does it mean “to be a princess”?

Being a public figure and a part of Royal Family means more privileges and even more responsibilities. Among many other expectations, people want to see that those in positions of power are using their influence to do good.

Princess Diana was well-known for her involvement in many social and humanitarian causes and was often called the ‘Queen of Hearts’. Today, both Meghan and Kate are also very socially active and support many charitable organisations. Even though Kate has been Princess for over seven years now, over half of our surveyed influencers believe that Meghan is the one who will do the most good by way of social justice in the future.

Is it all about the dress?

When it comes to the Royal Family, one of the most hotly contested topics on social media is fashion. It seems that Kate Middleton and Meghan Markle are no strangers to fashion and they remain both faithful to their style and respectful of the royal etiquette. So whose fashion sense is better? Again Meghan overtakes Kate with 61% of the overall vote.

The Meghan movement has already started

Both Kate & Meghan are perceived by the world in a very similar way. The Duchess of Cambridge still has a strong position as a woman in Royal Family. However, it seems that Meghan is the one who has captured the hearts and minds (and Instagram accounts!) of the people.

Considering that Meghan is at the beginning of her journey as a Princess, we can assume that she actually might be something more than ‘just a Queen’ and influencers seems to agree on that. 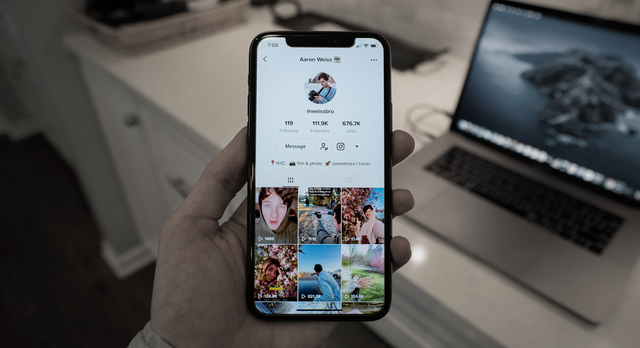 July 13, 2020
2020 Is The Year Of TikTok?
In a blink of an eye interest in TikTok skyrocketed and in recent months TikTok became one of the most popular players in the...
Read more 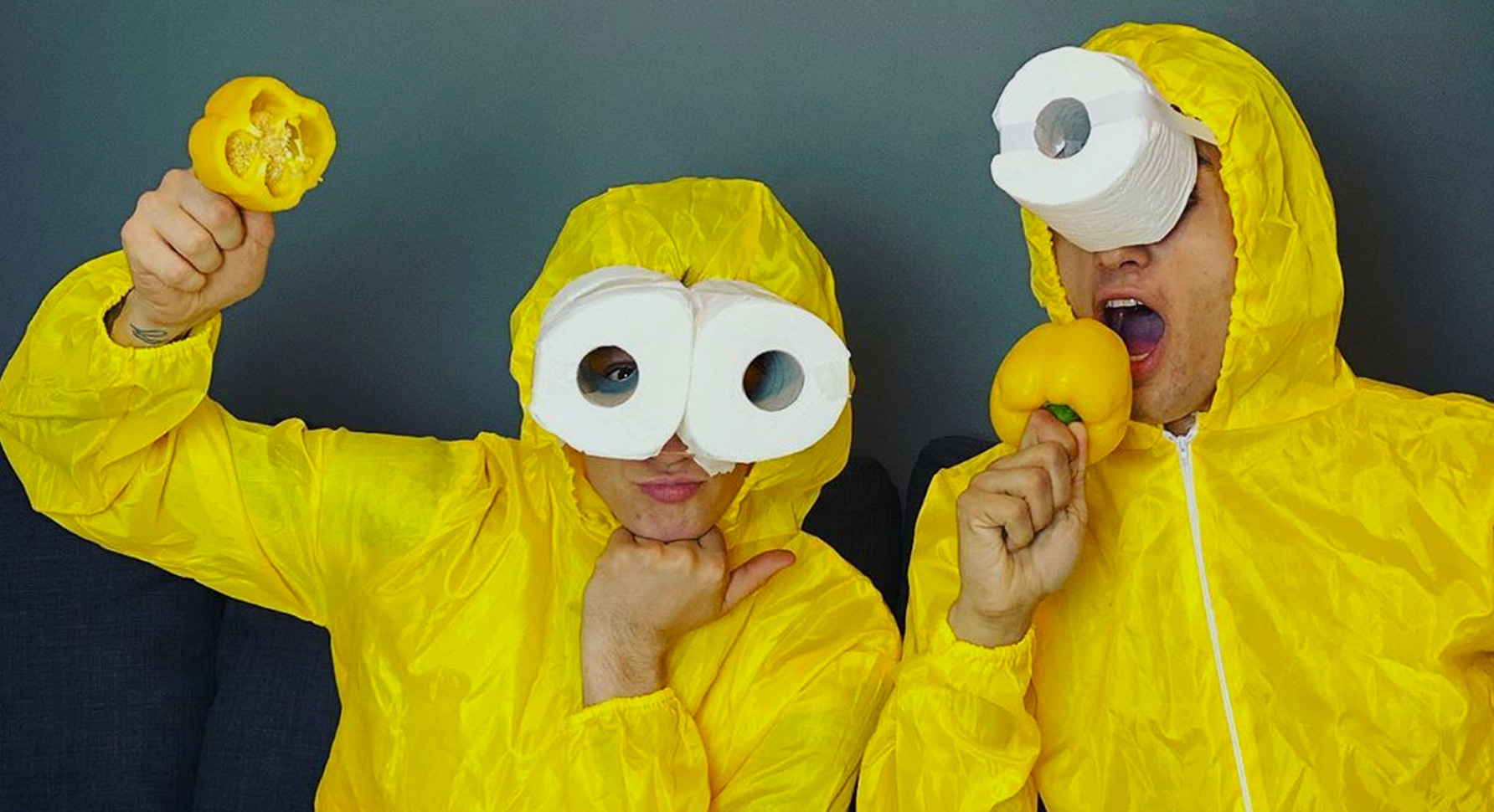 July 1, 2020
TikTok Is Currently The Most Downloaded App Of 2020!
If you are not on TikTok yet then hurry up and download the app TikTok is officially the new king of social media! ☝️🧠...
Read more
Subscribe
to our
newsletter
indaHash Labs newsletter
Most popular
The Meghan Markle movement [infographic]
A woman who will never become queen and whose husband is the furthest from the throne, Meghan Markle has stolen many hearts...
Expert zone
indaHash 2018 Summary!
Dear Community, indaHash is proud to present our yearly summary for 2018! This year we’ve experienced WORLDWIDE growth...
News
Here is why Social Influencers are the New Broadcasters
Our CEO Barbara Soltysinska fills us in on the growing marketplace for influencer marketing, and where mid tier influencer...
Expert zone
Subscribe to Our Blog
Your e-mail was added successfully!
You have already subscribed to our list, thanks!
E-mail address is not correct...
Server error, please try again later...
Download indaHash App
You can download our app from the App Store and Google Play

Find us
Our picks
The Influence of Valentines Day
Are Influencers Spending Money on Valentine’s Day 84% Say Yes! An international study of over 1000 influencers has...
Expert zone
5 steps to improve your collaboration skills with brands
Which brands should you choose to collaborate with How frequently should you take on their offers And most importantly - how...
Influencer
7 easy steps to become a professional Influencer
Hey you! Wanna become a professional Influencer Here’s are some simple tips so you can live like you want to and make real...
Expert zone
We use cookies on our website to give you the most relevant experience by remembering your preferences and repeat visits. By clicking “Accept All”, you consent to the use of ALL the cookies. However, you may visit "Cookie Settings" to provide a controlled consent.
Cookie SettingsAccept All
Manage consent

This website uses cookies to improve your experience while you navigate through the website. Out of these, the cookies that are categorized as necessary are stored on your browser as they are essential for the working of basic functionalities of the website. We also use third-party cookies that help us analyze and understand how you use this website. These cookies will be stored in your browser only with your consent. You also have the option to opt-out of these cookies. But opting out of some of these cookies may affect your browsing experience.

Find out more in our Cookie Policy - Cookie Policy.
Necessary Always Enabled
Necessary cookies are absolutely essential for the website to function properly. These cookies ensure basic functionalities and security features of the website, anonymously.
Functional
Functional cookies help to perform certain functionalities like sharing the content of the website on social media platforms, collect feedbacks, and other third-party features.
Performance
Performance cookies are used to understand and analyze the key performance indexes of the website which helps in delivering a better user experience for the visitors.
Analytics
Analytical cookies are used to understand how visitors interact with the website. These cookies help provide information on metrics the number of visitors, bounce rate, traffic source, etc.
Advertisement
Advertisement cookies are used to provide visitors with relevant ads and marketing campaigns. These cookies track visitors across websites and collect information to provide customized ads.
Others
Other uncategorized cookies are those that are being analyzed and have not been classified into a category as yet.
SAVE & ACCEPT
Powered by